A big big difference, not mentioned in any other stackoverflow answer relating to this topic clearly, is that reduce should be given a commutative monoid, i.e. an operation that is both commutative and associative. This means the operation can be parallelized.

This distinction is very important for Big Data / MPP / distributed computing, and the entire reason why reduce even exists. The collection can be chopped up and the reduce can operate on each chunk, then the reduce can operate on the results of each chunk - in fact the level of chunking need not stop one level deep. We could chop up each chunk too. This is why summing integers in a list is O(log N) if given an infinite number of CPUs.

But you cannot parallelize a foldLeft, so its runtime is always O(N) (even if you feed in a commutative monoid). This is because it's assumed the operation is not a commutative monoid and so the cumulated value will be computed by a series of sequential aggregations.

foldLeft does not assume commutativity nor associativity. It's associativity that gives the ability to chop up the collection, and it's commutativity that makes cumulating easy because order is not important (so it doesn't matter which order to aggregate each of the results from each of the chunks). Strictly speaking commutativity is not necessary for parallelization, for example distributed sorting algorithms, it just makes the logic easier because you don't need to give your chunks an ordering.

If you have a look at the Spark documentation for reduce it specifically says "... commutative and associative binary operator"

Now this is where it gets a little closer to the FP / mathematical roots, and a little trickier to explain. Reduce is defined formally as part of the MapReduce paradigm, which deals with orderless collections (multisets), Fold is formally defined in terms of recursion (see catamorphism) and thus assumes a structure / sequence to the collections.

There is no fold method in Scalding because under the (strict) Map Reduce programming model we cannot define fold because chunks do not have an ordering and fold only requires associativity, not commutativity.

It seems (as is often the case in etymology) that this original mathematical meaning has been lost, since the only obvious difference in programming is the signature. The result is that reduce has become a synonym for fold, rather than preserving it's original meaning from MapReduce. Now these terms are often used interchangeably and behave the same in most implementations (ignoring empty collections). Weirdness is exacerbated by peculiarities, like in Spark, that we shall now address.

So Spark does have a fold, but the order in which sub results (one for each partition) are combined (at the time of writing) is the same order in which tasks are completed - and thus non-deterministic. Thanks to @CafeFeed for pointing out that fold uses runJob, which after reading through the code I realised that it's non-deterministic. Further confusion is created by Spark having a treeReduce but no treeFold.

There is a difference between reduce and fold even when applied to non-empty sequences. The former is defined as part of the MapReduce programming paradigm on collections with arbitrary order (http://theory.stanford.edu/~sergei/papers/soda10-mrc.pdf) and one ought to assume operators are commutative in addition to being associative to give deterministic results. The latter is defined in terms of catomorphisms and requires that the collections have a notion of sequence (or are defined recursively, like linked lists), thus do not require commutative operators.

Extra: My Opinion On the Spark API

My opinion is that confusion would be avoided if use of the term fold was completely dropped in Spark. At least spark does have a note in their documentation:

This behaves somewhat differently from fold operations implemented for non-distributed collections in functional languages like Scala.

One other difference for Scalding is the use of combiners in Hadoop.

Imagine your operation is commutative monoid, with reduce it will be applied on the map side also instead of shuffling/sorting all data to reducers. With foldLeft this is not the case.

It is always good practice to define your operations as monoid in Scalding.

fold in Apache Spark is not the same as fold on not-distributed collections. In fact it requires commutative function to produce deterministic results:

This behaves somewhat differently from fold operations implemented for non-distributed collections in functional languages like Scala. This fold operation may be applied to partitions individually, and then fold those results into the final result, rather than apply the fold to each element sequentially in some defined ordering. For functions that are not commutative, the result may differ from that of a fold applied to a non-distributed collection.

This has been shown by Mishael Rosenthal and suggested by Make42 in his comment.

Structure of fold for RDD

is the same as structure of reduce for RDD:

where runJob is performed with disregard of partition order and results in need of commutative function.

Conclusion: fold on RDD cannot depend on order of chunks and needs commutativity and associativity.

If I am not mistaken, even though the Spark API does not require it, fold also requires for the f to be commutative. Because the order in which the partitions will be aggregated is not assured. For example in the following code only the first print out is sorted: 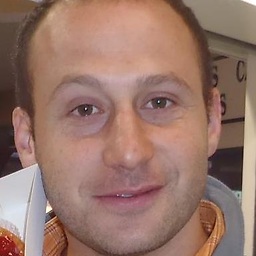