As per React Documentation (ending part),

The problem with latter syntax is that a different callback is created each time the LoggingButton renders. In most cases, this is fine. However, if this callback is passed as a prop to lower components, those components might do an extra re-rendering. We generally recommend binding in the constructor or using the class fields syntax, to avoid this sort of performance problem.

arrow function in the callback syntax:

I would honestly just use a class component in these cases. I'm aware of premature optimization, but creating a new function each time does just seem like extravagant wastefulness without much of a maintainability upside. tibbus has demonstrated the perf hit, and inline functions are arguably less readable than class methods. All you're losing out is the slick feeling of writing a functional component.

Inspired by @tibbus 's benchmark, I made this one that tests the perfomance using or not the useCallback hook. After several executions, it seams that the use of useCallback can be very important for high frequency rendering. 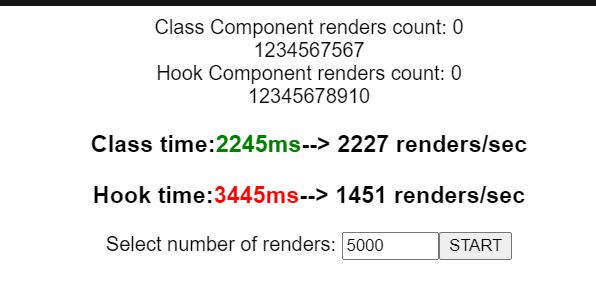 Interesting question, me and my coleagues had some worries about this, so I did a test.

I have added more click handlers to the components and then rendered them some 1000s times, the Class is faster as it does not define the functions each render, if you increase the number of functions defined, then the difference will be bigger:

Here it is a codesandbox so you can test the performance Class vs Hooks : https://codesandbox.io/s/hooks-vs-class-forked-erdpb

You can use useCallback feature :

useCallback will return a memoized version of the callback that only changes if one of the dependencies has changed. This is useful when passing callbacks to optimized child components that rely on reference equality to prevent unnecessary renders (e.g. shouldComponentUpdate).

First solution: To pass the your handleClick function to your functional component.

No, inner functions / closures are so common, there is no problem with them. The engine can heavily optimize those.

The point here is that you pass the function as a prop to the child component. And as the function was "recreated", it does not equal the previous function passed, annd thus the child does rerender (and that's whats bad for performance).

You can resolve that with useCallback, which memoizes the function reference.

Don't worry about it

However, when you need to make sure you use the same function every time, you can use useCallback

Why not use useCallback for onClick

Here is a reason why you shouldn't bother with useCallback for onClick handlers (and most other event handlers).

Consider the following code snippets, one without useCallback:

The only difference in the latter is that React doen's have to change the onClick on your button if props.foo remains the same. Changing the callback is a very cheap operation, and it's not at all worth complicating your code for the theoretical performance improvement it gives.

Also, it's worth noting that a new function is still created on every render even when you use useCallback, but useCallback will return the old one as long as the dependencies passed as the second argument are unchanged.

The point of using useCallback is that if you compare two functions with reference equality, fn === fn2 is true only if fn and fn2 point to the same function in memory. It doesn't matter if the functions do the same.

Thus, if you have memoisation or otherwise only run code when the function changes, it can be useful to use useCallback to use the same function again.

Another example is React.PureComponent, which will only re-render when props or state have changed. This can be useful for components that use a lot of resources to render. Passing e.g. a new onClick to a PureComponent on each render will cause it to re-render every time.