Below Hex to cmyk converter takes input as hex string and then convert input
to a cmyk(CYAN, MAGENTA, YELLOW , and BLACK.) color code, you can also select the color using color picker by clicking on the blue icon. 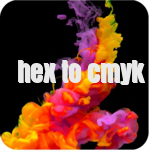 Cyan, magenta, the yellow and black color model is used less in multimedia production. This model is used more in the printing of the desktop publishing device. This color is a subtraction model and it is only used in color printing device.

Chromaticity model denotes color values ​​as frequency saturation and luminance. It is a three dimension model in which 2 dimensions define X and Y colors and the third dimension defines luminance. This is an additive model because different colors are created by adding x and y.
CIE models can be compared to the ability to identify human colors, but some devices such as scanners are unable to reproduce this process.

Light sources are described as their better hue, brightness, and saturation.Complimentary color sources are those that make white by combining together.Saturation is of color depth, Lightness or brightness is the percentage of black or white color mixed in any color, lightness to 100 percent will become white,the lightness of 0% is black, and 50% lightness in pure color.
In HSB and HSL models, you represent the HUE or the color as a 0 to 360-degree angle on the color wheel, and as a percentage of saturation, brightness and lightness

YIQ and YUV were developed for the TV broadcast. It is based on luminance and chrominance,
which is expressed as a wave amplitude and phase. YUV model is subtraction model. the
YUV model used in Full Motion video. Photo YCC was developed by the Kodak Company to provide a clear definition of digital color images with negative slides and other high-quality inputs.

Hue color has a special tone that is different from other colors, red, green and blue.
For example, our eyes can differentiate between red and blue colors, because their hues are different.

The color of saturation of any color has relative depth and purity of that color.
Reducing the saturation of the red hue will appear red color blurred.

The brightness or lightness of any color means that how much the black color has been added to the color so that it looks thicker. For example, to create “midnight blue” or “brick red” color, black color is required to be mixed with a special hue. Online rgb to hsl converter tool Below RGB to HSL converter takes input as Red, Green, and Blue(i.e r, g, b values fall within the range 0-255)and then convert input(RGB color) to a HSL color code, you can also select the color using color...