Here's an example from AndroidManifest.xml. You need to specify the MAIN and LAUNCHER in the intent filter for the activity you want to start on launch

You have not included Launcher intent filter in activity you want to appear first, so it does not know which activity to start when application launches, for this tell the system by including launcher filter intent in manifest.xml

Manifest is case sensitive, so please compare this lines for any case mismatch especially the word MAIN in:

just add this to your aplication tag in AndroidManifest.xml file

You missed in specifying the intent filter elements in your manifest file.Manifest file is:

Add and check this correctly. Hope this will help..

You can add launcher to activity in eclipse manifest visual editor:

Deleted because of negativity 477

If you have them already and you are still getting the error message but maybe its because you might be using more than more category or action in an intent-filter. In an intent filter there can only be one such tag. To add another category, put it in another intent filter, like the following

I had this same problem and it turns out I had a '\' instead of a '/' in the xml tag. It still gave the same error but just due to a syntax problem.

If you are using the standard eclipse IDE provided by google for Android development, you can check the "Launcher Activity" check-box while creating a new Activity. Please find below: 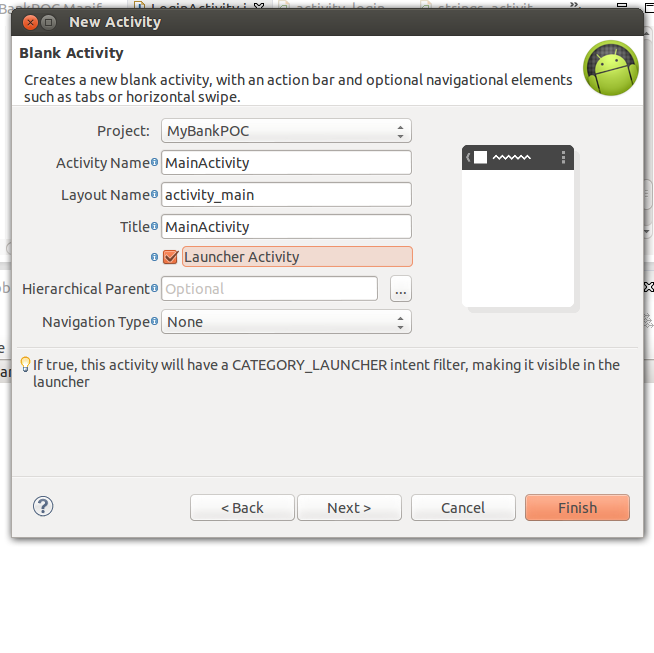 In Eclipse when can do this: 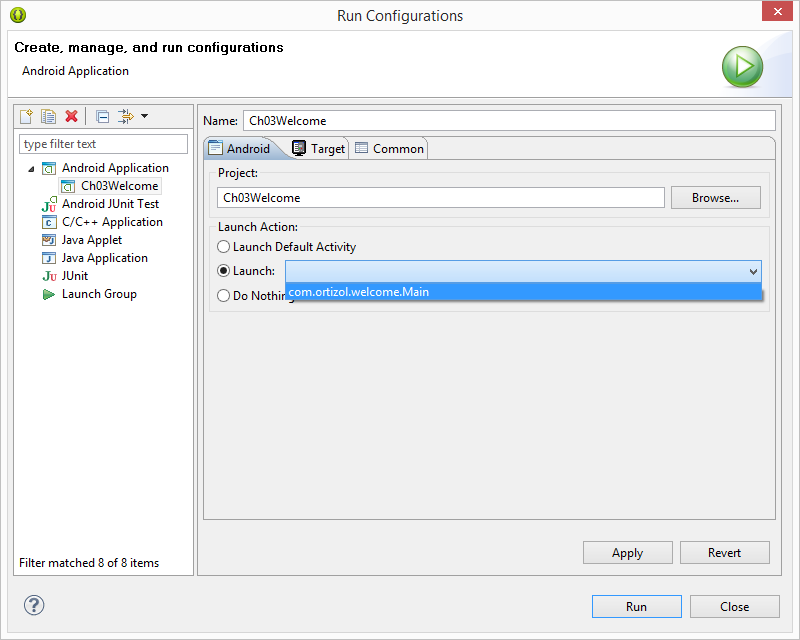 But it is preferable make the corresponding changes inside the Android manifest file. 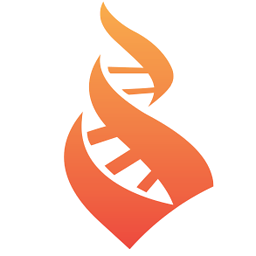 As has been pointed out, this error is likely caused by a missing or incorrect intent-filter.

I would just like to add that this error also shows up if you set android:exported="false" on your launcher activity (in the manifest).

And I get the desired output on the emulator.

Check your manifest.xml. Make sure you have the category LAUNCHER there.

Do you have an activity set up the be the launched activity when the application starts?

This is done in your Manifest.xml file, something like:

Like Gusdor said above, "Multiple action tags in a single intent-filter tag will also cause the same error." (Give him the credit! I could just kiss Gusdor for this!)
I didn't find any docs for this fact! I had added a new (USB) action and being clever, I lumped it in the same intent-filter. And it broke the launch. Like Gusdor said, one intent filter, one action! Apparently each action should go in its own intent filter.
It should look like this...

When I did this, WAZOO! it worked!

Multiple action tags in a single intent-filter tag will also cause the same error.